Gestational Diabetes Mellitus (GDM) (a condition wherein a high blood sugar level presents in the mother during pregnancy). While GDM poses great risks in the health of both the mother (haemorrhage, pre-eclampsia and sepsis) and the child (fetal macrosomia, spontaneous abortion and intrauterine death), very minimal forms of interventions in terms of diagnosis, treatment and prevention are present. Catching the condition early and managing it during the pregnancy will help avoid complications and will reduce morbidity and possibly both maternal and infant mortality among pregnant women and their children.

Globally, an estimated 422 million adults were living with diabetes in 2014, compared to 108 million in 1980. The global prevalence of diabetes has nearly doubled since 1980, rising from 4.7% to 8.5% in the adult population. This reflects an increase in associated risk factors such as being overweight or obese. Over the past decade, diabetes prevalence has risen faster in low and middle-income countries than in high-income countries.

Diabetes is a major cause of blindness, kidney failure, heart attack, stroke and lower limb amputation. Healthy diet, physical activity and avoiding tobacco use can prevent or delay type 2 diabetes. In addition diabetes can be treated and its consequences avoided or delayed with medication, regular screening and treatment for complications.

The resolution also encouraged Member States to develop national policies for the prevention, treatment and care of diabetes in line with the sustainable development of their health-care systems.

The theme for World Diabetes Day 2021-23 is access to diabetes care.

100 years after the discovery of insulin, millions of people with diabetes around the world cannot access the care they need. People with diabetes require ongoing care and support to manage their condition and avoid complications.

The centenary of the discovery of insulin presents a unique opportunity to bring about meaningful change for the more than 460 million people living with diabetes and the millions more at risk. United, the global diabetes community has the numbers, the influence and the determination to bring about meaningful change. We need to take on the challenge.

Diabetes is a chronic disease, which occurs when the pancreas does not produce enough insulin, or when the body cannot effectively use the insulin it produces. This leads to an increased concentration of glucose in the blood (hyperglycaemia).

Type 1 diabetes (previously known as insulin-dependent or childhood-onset diabetes) is characterized by a lack of insulin production.

Type 2 diabetes (formerly called non-insulin-dependent or adult-onset diabetes) is caused by the body’s ineffective use of insulin. It often results from excess body weight and physical inactivity.

Gestational diabetes is hyperglycaemia that is first recognized during pregnancy.

The Project Management Team (PMT) will implement the project over four components over a three-year period: 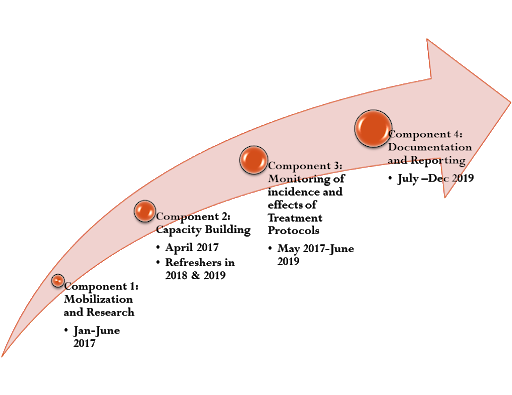 To pioneer a model for accessing Gestational Diabetes Mellitus (GDM) care in the local government (public health facility) settings, involving one public hospital and one health station in each of the two sites based on existing guidelines.

The main purpose of the “Accessing GDM Care” project, launched by the Institute for Reproductive Health Philippines and the World Diabetes Foundation, was to provide localized guidelines for the diagnosis and treatment of GDM in public health centers and hospitals. Brgy. Gulod Health Center and Novaliches District Hospital in Quezon City and Manggahan Super Health Center and Pasig City General Hospital in Pasig City were involved in this project.

This project disseminated knowledge and information about gestational diabetes mellitus (GDM) to manage GDM and prevent its complications. In addition, the project also advocates for integration of GDM into PhilHealth's Maternity Care Package (MCP) and Neonatal Care Package (NCP) and eventually provides GDM testing and treatment in the Department of Health's Safe Motherhood Program packages used in public health facilities.

This project lasted three years from 2016 to 2019 and helped 600 (out of over 2000 women screened) GDM Nanays in four facilities and reached out to 2000 community members for GDM awareness.